How brief can a poem be? The briefest poem in the English language is probably that odd construction by the American poet, Aram Saroyan, which he wrote in the nineteen-seventies.  His four-legged “m” has been cited in the Guinness Book of Records as the world’s shortest poem. How is this poem supposed to be read? Bob Grumman in his intriguing essay, MNMLST POETRY, calls it “a closeup of an alphabet being born”. It may be an amalgamation of  “m” and “n”. It may also be a pun on “I am”, implying the formation of consciousness itself. If this all sounds far-fetched, Gumman goes further in arguing the case for the poem with a textual acuity that would put many a scholar to shame. The Saroyan poem, he argues, “snaps us visually into the center of an alphabet just starting to form, between its m and n. And it brings to mind the way a doubled u becomes a w. The poem also comes across as a pun for the word, “am,” to suggest some kind of superior, or perhaps gross, state of being–an “am” times one-and-a-half.” (I am unsure how serious he is in all of this.)

Another unacclaimed one letter poem suggests to Gumman that the Guinness Book of Records may be wrong. He has come across a poem by the avant-garde Canadian poet, publisher, and bookseller jwcurry (John Curry) which consists of the letter “i” where the tittle is a thumbprint. And he applies his forensic textual analysis to that poem. “The curry piece,” Bob Gumman explains,  “charmingly turns a standard, thoroughly un-unique letter i into the very essence of individuality by giving it a thumbprint.”

One of Aram Saroyan’s most famous poems was the unconventionally spelled word “lighght” in the centre of a blank page. This poem was featured in The American Literary Anthology and, like all poems in the volume, received a $500 cash award from the National Endowment for the Arts, then just five years old. The NEA was created in 1965, the same year the poem was written. Some prominent American politicians objected to the per-word amount of the award, complaining that the word was not a real poem and was not even spelled correctly. This was the NEA’s first major controversy. Years after it was written the American President, Ronald  Reagan, was still making pejorative allusions to “lighght.” For more information on the poem and on the controversy, see the relevant links below.

The Scottish poet Edwin Morgan (1920-2010) published a hand-made booklet in which he reprinted nine one-word poems which were first published in the final issue of Poor. Old. Tired. Horse. no. 27 (c.1967). Ian Hamilton Finlay had requested from his contributors poems which “consist of one word, with a title of any length, these two elements forming, as it were, a corner which would then contain the meaning”. He wrote to the Austrian poet Ernst Jandl, “The kind of poem I would most like is a serious one, for many people have sent examples which are only briefly witty, and the form is capable of more than that. After all, one has the whole title to move around in.” These poems by Edwin Morgan are otherwise uncollected, though three (‘glasgow’, ‘morning’ and ‘blue’) are included in Atoms of Delight: an anthology of Scottish haiku and short poems (2000). Ian Hamilton Finlay produced his own book, Grains of Salt: 14 One-word Poems, in which the poems accompany linocuts of nautical subjects.

Geof Huth has coined a term to describe one version of the one word poem – PWOERMD – any one-word poem, such as Aram Saroyan’s famous ‘lighght’ or Jonathan Brannen’s ‘pigeoneon’ .  (This word is a veritable pwoermd itself, since the “pw” at its beginning mirrors the “md” at the end, leaving the pseudo-archai-poetic “oer” in the middle of the word.)

This is what Ron Sillman has to say about Geoff Huth: “Huth, if you read his work or his website, is the most serious theorist of visual poetry I’ve ever seen. He is, in a sense, exactly what the genre needs, a systematic thinker and a goad, someone who will – by example if nothing else – prod others to try harder, do better.”

In what may be a mockery of the one word poem, and particularly the fame or notoriety that attended “lighght”, Dave Morice in 1972 published Matchbook, a magazine of one word poems, costing five cents a copy. Each issue was printed on one-inch square pages stapled inside of matchbooks donated by local businesses. Edited by the fictional Joyce Holland, each issue featured nine one-word poems submitted by contributors. Here are some of the contributions :-

The longest submission was  whahavyagotthasgudtareedare by  Trudi Katchmar which appeared  as a foldout.

When Ian Hamilton Finlay (above) makes serious claims for the one word poem or when Geof Huth creates a theoretical underpinning for the form, they are both going further than I am prepared to concede. But there is a certain, almost perverse, fascination in the one word poem. What do you think? Is it fun, fundamental and flourishing, or is it just folly? Comment below. 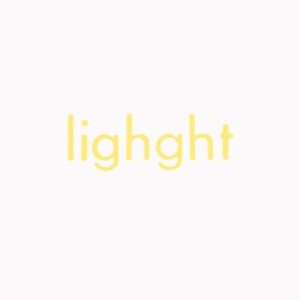 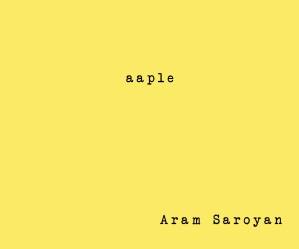 (If you have difficulty viewing this image, it reads:-  morni,ng)

A Patch for a Rip-tide

A Grey Shore Between Day and Night

The Last Breath of a Famous Philosopher

The Lover Writes a One-Word Poem

A Poetry Foundation article on the story behind the poem “lighght” by Aram Saroyan.
The Paris Review account of the Saroyan poem
The Scottish Poetry Library Page on Edwin Morgan.