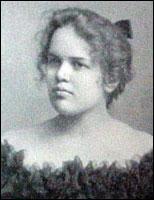 Adelaide Crapsey (1878–1914) was born and raised in New York city and attended public school in Rochester, New York and, later,  attended a girls’ preparatory school in Kenosha, Wisconsin before entering Vassar College. She became a teacher for a short while and, in 1904, spent a year at the School of Classical Studies in Rome. Later she taught for two years at a college in Massachusetts.

Crapsey was in poor health which was eventually diagnosed as tuberculosis. She withheld the news from her family and continued to teach. She collapsed in the summer of 1913, after which she then moved to a private cure home in New York where she stayed for a year. In August, 1914, Crapsey returned to Rochester, where she died on October 8, 1914, at the age of 36.

She wrote many of the poems that appeared in her only volume, Verse, a posthumous selection of her cinquains and other verse forms, in the last year of her life, and in the knowledge that she was dying of tuberculosis. Their publication in the year following her death led to critical acclaim, particularly for those poems she called Cinquains.  The New Republic review of Verse in 1916 claimed that Crapsey’s “emotion was true and poignant, her craft exacting, her spirit the artist’s. She should be reckoned and warmly cherished as a poet.” Her entire poetic oeuvre comprises fewer than one hundred poems, but she wrote them up to the end, even from her cure home in New York. Perhaps because of her lingering illness, her work centered primarily on her confrontation with mortality. The subject of death took on more than usual significance to a poet who knew she would not live long. Revised editions of Verse were published in 1922 and 1934 and contain earlier unpublished work.

Also published posthumously in 1918 was the unfinished A Study in English Metrics, a brief book of only eighty pages, which she began during her three-year stay in Europe, and which she described in the prefatory note as ‘a laborious analysis dictated by an acute sense of beauty of verse by an aesthetic experience of unusual intensity.’  While in London she had studied English prosody at the British Museum in 1910.  Her small but meticulously researched study of English metrics garnered the praise of several contemporary reviewers. She thought of her researches as her “only serious work” stated Susan Sutton Smith in the Dictionary of Literary Biography, and regarded some of her verses “mere by-products” of her metrical studies. Smith has summarised Crapsey’s theory as an attempt “to classify poets by comparing the percentage of one—or two—syllable words with the percentage of polysyllabic words in their poems. She hoped to develop a theory of the relation between natural accent and poetic accent in English verse.”

Adelaide Crapsey may be said to have invented, if that is the right word, the cinquain. In her collection titled Verse, published one year after her death, she included 28 cinquains.The five unrhymed lines of the cinquain follow strict accentual-syllabic requirements and rely heavily on the iambic foot. The lines consist of two, four, six, eight, and two syllables (or accents), respectively. The accumulation of energy in lines one through four are followed by an inevitable collapse in the fifth line. In contrast to the Japanese forms upon which she based them, Crapsey always titled her cinquains, effectively utilizing the title as a sixth line. Her cinquains depend on strict structure and intense physical imagery to communicate a mood or feeling. Crapsey was acquainted with several books of Japanese poetry in translation. She admired the Japanese poets for their compressed language and formal aesthetics. It is not very clear how well she understood the complexities of the Japanese tradition of haiku and tanka, but the influence of these forms is evident in her work.

Her interest in Japanese poetry has also led some critics to link her to the Imagist movement that became popular shortly after she died and was led by the likes of Ezra Pound, H. D., and Amy Lowell. Like Ezra Pound, she admired the Japanese poets for their compressed language and formal aesthetics. Louis Untermeyer called her “an unconscious Imagist.” Although her untimely death precluded any chance for her to collaborate with these poets, Crapsey was undoubtedly influenced by some of the same factors that fomented their movement including a desire to pull back from some of the excesses of the Georgian poets. Like Crapsey’s cinquains, Imagist poetry is characterised by the precise use of imagery and economy of language.

Although not as popular as the haiku, the cinquain continues to be used today. The Scottish poet William Soutar  wrote over one hundred cinquains between 1933 and 1940. The contemporary poet George Szirtes has experimented with the form and written about those experiments in his blog. He has used his Twitter account  @george_szirtes to publish his cinquains, including a fascinating “translation” of Sappho’s famous Moon and Pleiades poem in his Ten Cinquain Variations on Sappho.

Listen…
With faint dry sound,
Like steps of passing ghosts,
The leaves, frost-crisp’d, break from the trees
And fall.

With swift
Great sweep of her
Magnificent arm my pain
Clanged back the doors that shut my soul
From life.

These be
Three silent things:
The falling snow…the hour
Before the dawn…the mouth of one
Just dead.

Look up…
From bleakening hills
Blows down the light, first breath
Of wintry wind…look up, and scent
The snow!

Keep thou
Thy tearless watch
All night but when blue-dawn
Breathes on the silver moon, then weep!
Then weep!

Well and
If day on day
Follows, and weary year
On year…and ever days and years…
Well?

Still as
On windless nights
The moon-cast shadows are,
So still will be my heart when I
Am dead.

SUSANNA AND THE ELDERS

“Why do
You thus devise
Evil against her?” “For that
She is beautiful, delicate;
Therefore.”

But me
They cannot touch,
Old Age and death…the strange
And ignominious end of old
Dead folk!

If it
Were lighter touch
Than petal of flower resting
On grass, oh still too heavy it were,
Too heavy!

The cold
With steely clutch
Grips all the land…alack,
The little people in the hills
Will die!

The old
Old winds that blew
When chaos was, what do
They tell the clattered trees that I
Should weep?

Not Spring’s
Thou art, but her’s,
Most cool, most virginal,
Winter’s, with thy faint breath, thy snows
Rose-tinged.

The sun
Is warm to-day,
O Romulus, and on
Thine olden Palatine the birds
Still sing.

“He’s killed the May and he’s laid her by
To bear the red rose company.”

Not thou,
White rose, but thy
Ensanguined sister is
The dear companion of my heart’s
Shed blood.

I know
Not these my hands
And yet I think there was
A woman like me once had hands
Like these.

A-sway,
On red rose,
A golden butterfly…
And on my heart a butterfly
Night-wing’d.

Burdock,
Blue aconite,
And thistle and thorn…of these,
Singing, I wreathe my pretty wreath
O’ death.

Just now,
Out of the strange
Still dusk…as strange, as still…
A white moth flew. Why am I grown
So cold?

My tent
A vapour that
The wind dispels and but
As dust before the wind am I
Myself.

As it
Were tissue of silver
I’ll wear, O fate, thy grey,
And go mistily radiant, clad
Like the moon.

LAUREL IN THE BERKSHIRES

Sea-foam
And coral! Oh, I’ll
Climb the great pasture rocks
And dream me mermaid in the sun’s
Gold flood.

Seen on a Night in November

How frail
Above the bulk
Of crashing water hangs,
Autumnal, evanescent, wan,
The moon.

By Zeus!
Shout word of this
To the eldest dead! Titans,
Gods, Heroes, come who have once more
A home!

NOW BARABBAS WAS A ROBBER

No guile?
Nay, but so strangely
He moves among us…Not this
Man but Barabbas! Release to us
Barabbas!

Oh me,
Was there a time
When Paradise knew Eve
In this sweet guise, so placid and
So young?

Thou hast
Drawn laughter from
A well of secret tears
And thence so elvish it rings,—mocking
And sweet:

In your
Curled petals what ghosts
Of blue headlands and seas,
What perfumed immortal breath sighing
Of Greece.

A scholarly exploration of the American cinquain as popularized by Adelaide Crapsey.

The Adelaide Crapsey page on the Terebess site.

The Adelaide Crapsey page on the Poetry Foundation site.