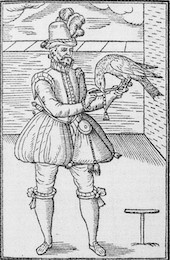 A falconer, woodcut illustration from Turberville’s Book of Falconry or Hawking (1575).

George Turberville (c.1540 – c.1610) was an English poet born at Whitechurch in Dorset of a right ancient and genteel family. The Turbervilles were an old Dorsetshire family, the inspiration for the d’Urbervilles of Thomas Hardy’s novel, Tess of the d’Urbervilles. George Turberville was a scholar of Winchester College in 1554 at the age of fourteen and, after studying in New College, Oxford in 1561, he moved to the Inns of Court in London where he gained a reputation as a poet and man of affairs. In 1568 he accompanied, as his secretary, Thomas Randolph, who received a commission from Queen Elizabeth to be ambassador to the Emperor of Russia, Ivan the Terrible. It was in Moscow that he composed his first collection of poems, entitled Poems describing the Places and Manners of the Country and People of Russia, Anno 1568. No copy of this work survives.  In 1575 he acquired a property at Shapwick in Dorset where, according to his friend, Anthony Wood, he was esteemed a most accomplished gentlemen, and his company was much sought after and desired by all men.

His Epitaphs, Epigrams, Songs and Sonnets appeared “newly corrected with additions” in 1567. (The poems below, with modernised spelling, are taken from that collection.) He was the first English poet to publish a book of verses to his lady, a genre that became popular in the Elizabethan age. In that same year he published translations of Ovid and Mantuanus, which included some of the first attempts at blank verse in English. His translation of The Heroycall Epistles of the Learned Poet, Publius Ovidius Naso was odd for the time because it seems to have a sexual aggression, bordering on violence, which was very uncommon in poems of the age. The Book of Falconry or Hawking (from which the image left is taken) and the Noble Art of Venerie (printed together in 1575) were also attributed to Turberville.

George Turberville was popular in his day. His contemporary, Sir John Harington, whose poetry is discussed and anthologised in another Brief Poems post,  has an epitaph in commendation of ‘George Turbervill, a learned gentleman,’ in his first book of Epigrams (1618), which concludes, ‘My pen doth praise thee dead, thine grac’d me living.’ George Gascoigne was friendly with Turbervile, who was probably the ‘G. T.’ from whom the manuscript of Gascoigne’s ‘A Hundreth Sundrie Flowres’ was obtained. Turbervile received the praise of George Puttenham in his Art of Poesie, although he was also called a ‘bad rhymer,’ and it is plain from contemporaries like Thomas Nashe and Gabriel Harvey that he came to be regarded as worthy but also outdated. He had a modest sense of his own worth.  In the epilogue to his collection, he describes himself as paddling along the banks of the stream of Helicon, like a sculler against the tide, for fear of the deep stream and the ‘mighty hulkes’ that adventured out so far. He viewed himself as a gentleman amateur who chose light over serious verse.  I write but of familiar stuffe, because my stile is lowe… Not euery woodman that doth shoote, hath skill to chose his Deere.

The title page of his Tragical Tales (1587), which are translations from Boccaccio and Bandello, says that the book was written at the time of the author’s troubles. What these troubles were is now unknown. A George Turberville was summoned before the council on 22 June 1587 to answer ‘certaine matters objected against him’. His friend, Anthony Wood, says he was living and in high esteem in 1594. From the fact that the 1611 edition of The Book of Falconry or Hawking  is labelled ‘Heretofore published by George Turbervile, gentleman,’ it is assumed that the author was dead prior to that year.

GEORGE TURBERVILLE AND THE PLAIN STYLE

I first came across the poetry of George Turberville in an excellent anthology edited by John Williams, English Renaissance Poetry, a book so battered from  perusal over four 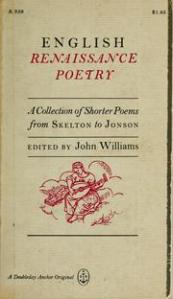 decades that it is now almost falling apart. According to Williams, His best poems are either witty or ironic or both; partly because of the perfection of their execution and the smallness of their themes, they remind me of the later Madrigalists, though the language and feeling of Turberville have a Native dryness unlike that of later poets. Yvor Winters, who inspired the anthology, described that Native dryness as the plain style where the poem has a theme usually broad, simple, and obvious, even tending toward the proverbial, but usually a theme of some importance, humanly speaking; a feeling restrained to the minimum required by the subject; a rhetoric restrained to a similar minimum, the poet being interested in his rhetoric as a means of stating his matter as economically as possible, and not, as are the Petrarchans, in the pleasures of rhetoric for its own sake. It is the simplicity and the concision, that stating the matter as economically as possible, I find admirable. When he uses the word sonnet, as he does in a poem below, it is in the old sense of being freely applied to poems of varied rhyme-scheme, length, and meter, and where, as his friend George Gascoigne complained, some thinke that all Poemes (being short) may be called Sonets. In his thematic approach, Turberville’s poetry is mostly conventional for the Elizabethan era, concerned with time passing (the clock tick-tocking) and the vagaries of love, albeit with an often caustic tone. But it continues to resonate today as I hope the selection below exemplifies.

Master Googe his Sonnet of the pains of Love

Two lines shall tell the grief
that I by Love sustain:
I burn, I flame, I faint, I freeze,
of Hell I feel the pain.

Turberville’s answer and distich to the same.

Two lines shall teach you how
to purchase ease anew:
Let Reason rule where Love did reign,
and idle thoughts eschew.

Of one that had little Wit

I thee advise
If thou be wise
To keep thy wit
Though it be small:
‘Tis rare to get
And far to fet,
‘Twas ever yit
Dearest ware of all.

Of one that had a great Nose.

Stande with thy Nose against
the Sun with open chaps,
and by thy teeth we shall discern
what tis a clock perhaps.

At night when ale is in,
like friends we part to bed;
In morrow gray, when ale is out,
Then hatred is in head.

Of the Clock and the Cock.

Good reason thou allow
one letter more to me
than to the cock: for cocks do sleep
when clocks do wake for thee.

Of the cruel hatred of Stepmothers.

The son-in-law his stepdame being dead,
Began her hearse with garlands to commend:
Meanwhile there fell a stone upon his head
From out the tomb that brought the boy abed,
A proof that stepdames hate hath never end.

The Lover to His Lady, That Gazed Much Up to The Skies

My Girl, thou gazest much
Upon the golden skies:
Would I were Heaven, I would behold
Thee then with all mine eyes.

Of an open foe and a feigned friend

Oh both give me the man
that says, I hate in deed;
than him that hath a knife to kill,
yet wears a friendly weed.

Of a Rich Miser.

A miser’s mind thou hast,
thou hast a prince’s pelf:
which makes thee wealthy to thine heir,
a beggar to thy self.

The Wikipedia Page on George Turberville.

A web version of Epitaphes, epigrams, songs and sonets with a discourse of the friendly affections of Tymetes to Pyndara his ladie. Newly corrected with additions, and set out by George Turbervile Gentleman.

A reproduction of the 1567 edition of Epitaphes, epigrams, songs and sonets with a discourse of the friendly affections of Tymetes to Pyndara his ladie. Newly corrected with additions, and set out by George Turbervile Gentleman.

A reproduction of the 1576 edition of Tubervilles’ Booke of Hunting.