Matsuo Bashō (1644 – 1694), was the most famous poet of the Edo period in Japan and is still renowned as perhaps Japan’s most popular poet. Today he is recognized as the greatest master of haiku (then called hokku). And his most famous haiku, probably the most famous poem in Japan, is his brief poem about the frog jumping into the water of an old pond. It has the same iconic status in Japanese poetry as William Carlos Williams’ red wheelbarrow has in American poetry, William Wordworth’s daffodils has in English poetry and William Butler Yeats’s Lake Isle of Innisfree has in Irish poetry.

Basho’s frog haiku is almost definitely the most famous haiku ever composed. Here is the poem in the original Japanese:

And here is a literal translation:

This haiku, by Basho, was said to have occurred when Basho’s Zen master, Boncho, was visiting him. According to legend, the master had asked Basho a koan-like question (meaning a riddle with no answer) and Basho, instead of searching for an answer, replied with “a frog jumps into, the sound of water.” This may be true as Basho was living, at that time, in a cottage-hut his students had built for him on the marshy ground at the edge of what is now Tokyo. So he was living in an area with plenty of frogs.

The first line is a simple setting of the scene -“The old pond.” A frog appears, suggesting twilight. To the Japanese, frogs are pleasant little creatures, full of energy and activity. It jumps in the pond and creates a sound. The word “oto” is onomatopoeic. It is interesting to see various Western attempts to translate this word and sound. There is “splash” (used by six of the translators below: Jozy Big Mountain, Lucien Stryk, Eli Siegel, Peter Beilenson, Dion O’Donnol and Cid Corman); there is “plop” (used by four: Alan Watts, Peter Beilenson, James Kirkup and Harold Stewart); there is “plash” (used by Clare Nikt); there is “plunks” (used by Dick Batten); then there is my favourite, “kerplunk!” (used by Allen Ginsberg).

I tried to translate the poem myself but, knowing no Japanese and not having the brevity associated both with the haiku and with the poems on this post, it morphed into a sonnet.

That day a dark, vermillion, winter sky,
like a Turner water-colour, was seen
reflected in an old pond where, nearby,
the poet Basho watched a small, unclean
and speckled frog jump in the evening air
and meet the water with a gentle plop,
an almost soundless splash, a plash near where
the other sounds of twilight seemed to stop
as Basho, without writing, memorised
that gentle movement and, with a wry smile,
acknowledged to himself he had devised
a way to turn a frog into a style.
So: this is my version of Basho’s frog.
Go: post your comments on my briefpoems blog. 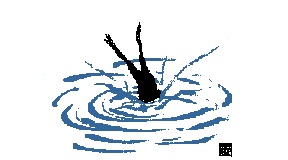 The old pond;
A frog jumps in —
The sound of the water.

An old pond —
The sound
Of a diving frog.

Pond, there, still and old!
A frog has jumped from the shore.
The splash can be heard.

The old pond, yes, and
A frog-jumping-in-the-
Water’s noise!

The old pond, aye! And the sound of a frog leaping into the water.

old pond
a frog jumps into
the sound of water

An old pond
A frog jumps in —
Sound of water.

The silent old pond
a mirror of ancient calm,
a frog-leaps-in splash.

ancient is the pond —
suddenly a frog leaps — now!
the water echoes

The old pond,
A frog jumps in:
Plop!

The old pond
A frog jumped in,
Kerplunk!

Listen! a frog
Jumping into the stillness
Of an ancient pond!

The old green pond is silent; here the hop
Of a frog plumbs the evening stillness: plop!

The old pond —
a frog jumps in,
sound of water.

Hear the lively song
of the frog in
BrrrBrrrBrrptyBrrrBrrrrrrrrrrIp
Plash!

A Contrarian View of Basho’s Frog

Further translations of the poem (including a Limerick version) available on the Suiseki blog.

Thirty-two translations and one commentary.

Dan King gives his response to the poem 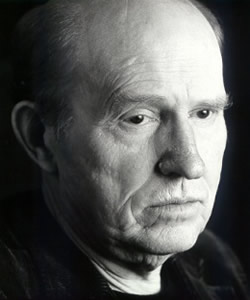 A. R. Ammons (1926-2001) was born in rural North Carolina, and his experiences growing up on a cotton and tobacco farm during the Great Depression inspired a great deal of the poet’s work. He is best know for his long poems such as the unusual book length poem, Tape for the Turn of the Year (1965) a daily journal originally composed on a thin roll of paper. He wanted to write a poem confined in length and width, and so he wrote the entire poem on a roll of adding machine tape, and the result was a diary of the last part of one year and the beginning of another. I knew him as the author of that great poem Gravelly Run  and the much anthologised “Corsons Inlet”. (Hear him read it on YouTube.)

It was only recently I discovered he had written numerous short poems, including one collection entitled The Really Short Poems of A. R. Ammons (1992). David Kirby in the TLS has praised “his short lines, his overall brevity, his avoidance of punctuation marks other than the occasional comma and that quick stop-and-go colon are hallmarks of his minimalism, his exquisitely unencumbered technique.” They may look casual but they are the work of a great craftsman. As Ammons explained, “Short poems, for me, are coherences, single instances on the periphery of a nonspecified center. I revise short poems sometimes for years, whereas, since there is no getting lost in the long poem, I engage whatever comes up in the moment and link it with its moment….in my short poems, I go over them and over them testing them out. Often, I don’t change more than a word or two, but sometimes the whole poem is radically changed.”

The poems included below span Ammon’s whole career and prove repeatedly that brevity is indeed the soul of wit. A few of them, the first two in particular, have almost achieved the status of classics. The range is impressive. Some are mordantly funny paradoxes and others are compressed moments of lyric intensity. And all within the space of a tweet.

BRIEF POEMS BY A. R. AMMONS

Bravery runs in my family.

One failure on
Top of another

Small Song
The reeds give way
to the wind

and give
the wind away

I found a
weed
that had a

mirror in it
and that
mirror

looked in at
a mirror
in

me that
had a
weed in it

so small
when I

living it
up down.

I don’t
want to

be taken
seriously except

that I
want my

wish not
to be

taken seriously
to be

Poetry To The Rescue

You must be
nearly lost to
be (if
found) nearly
found

It’s nice
after dinner
to walk down to
the beach

and find
the biggest
thing on earth
relatively calm.

May happiness
pursue you,

catch you
often, and,

should it
lose you,

be waiting
ahead, making

a clearing
for you

One can’t
have it

both ways
and both

ways is
the only

way I
want it.

From The Complete Poems of A. R. Ammons, edited by Robert M. West and published by W. W. Norton and Company.

The Paris Review interview with A. R. Ammons.

Another, more detailed, interview from Terrain.

A New York Times review of The Complete Poems of A. R. Ammons (Volume 1 and Volume 2).

William Allingham (1824 – 1889) was born in the Irish port town of Ballyshannon, County Donegal where he worked as a custom’s officer and where he began to write the poetry which was to bring him some success. He held several similar posts in the custom service in Ireland and England until 1870, when he retired from the service. He became sub-editor of Fraser’s Magazine, which he edited from 1874 to 1879.  He had published a volume of Poems in 1850, followed by Day and Night Songs, a volume containing many charming lyrics, in 1855. His poem ‘The Faeries’ was much anthologised and is still widely read today. A shorter, sharper poem, too long to fit in a tweet, is, to my mind, his best.

A Memory
Four ducks on a pond,
A grass-bank beyond,
A blue sky of spring,
White clouds on the wing;
What a little thing
To remember for years-
To remember with tears!

In the 1870’s, he moved to London and among the many volumes of poetry which he wrote was one containing numerous brief poems. In 1884 he published Blackberries Picked off Many Bushes, a collection of short epigrammatic poems, as miscellaneous in subject and tone as the title suggests. He wrote to one friend, the Irish poet Samuel Ferguson, “I have a little book in the press called ‘Blackberries’, aphoristic and epigrammatic, which will please nobody and yet out it must come.” When it was first published he sent a copy to a friend describing it as “a queerish little basket of “Blackberries”..many being indigestible…” The dedication is “For Anybody” and there is a nonchalant take-it-or-leave-it air to the process:

The brief poems are arranged according to topic – literature, love, religion, politics. Given his Irish background, it is not surprising that his politics were radical for the time. He was opposed to Britain’s imperialist wars and could, as the poems below show, condense his ideas into brief and pithy statements that still resonate today.

Sin we have explained away;
Unluckily, the sinners stay.

The Age of Poetry is gone,
The Age of Suicide sweeps on;
Pray Heaven it pass, tornado-wise,
And leave behind it clearer skies!

***
If a single verse you find
Palatable to your mind,
Be that the core, the rest the rind.

Is “Purgatory”
An idle story?
Souls desire
To be washed with fire.

Solitude is very sad,
Too much company twice as bad.

***
While friends we were, the hot debates
That rose ‘twixt you and me!
Now we are mere associates,
And never disagree.

All stupid folk are self-complacent too,
Because they never see the harm they do.

One who can see without seeming to see–
That’s an observer as good as three.

Not men and women in an Irish street
But Catholics and Protestants you meet.

Who speaks to a crowd
Should be plain, brief and loud.

While friends we were, the hot debates
That rose ‘twixt you and me!
Now we are mere associates,
And never disagree.

England! leave Asia, Africa, alone
And mind this little country of thine own.

With pen and with pencil we’re learning to say
Nothing, more cleverly every day.

Soul’s Castle fell at one blast of temptation,
But many a worm had pierced the foundation.

If he draw you aside from your proper end,
No enemy like a bosom friend.

The weak have no opinions; but the strong,
Full of self will, go very badly wrong.

***
Is idleness indeed so black a crime?
What are the Busy doing, half their time?

If I could hate thee, Squirmley, thus I’d curse —
” Remain thyself! ” — I could not wish thee worse.

The Poet launched a stately fleet: it sank.
His fame was rescued by a single plank.

I dreamt I went to hell one night.
The little devils were impolite.
But Satan with the sweetest air
Bow’d me to a red hot chair.

A chronology of his life is available on the Irish Corpus of Electronic Texts page.

50 poems by William Allingham are available on the PoemHunter site.

A Poetry and Flash Fiction competition with a prize fund of €300 in each category is being held in conjunction with the festival. The deadline for each entry is September 14th 2015. Details are available here